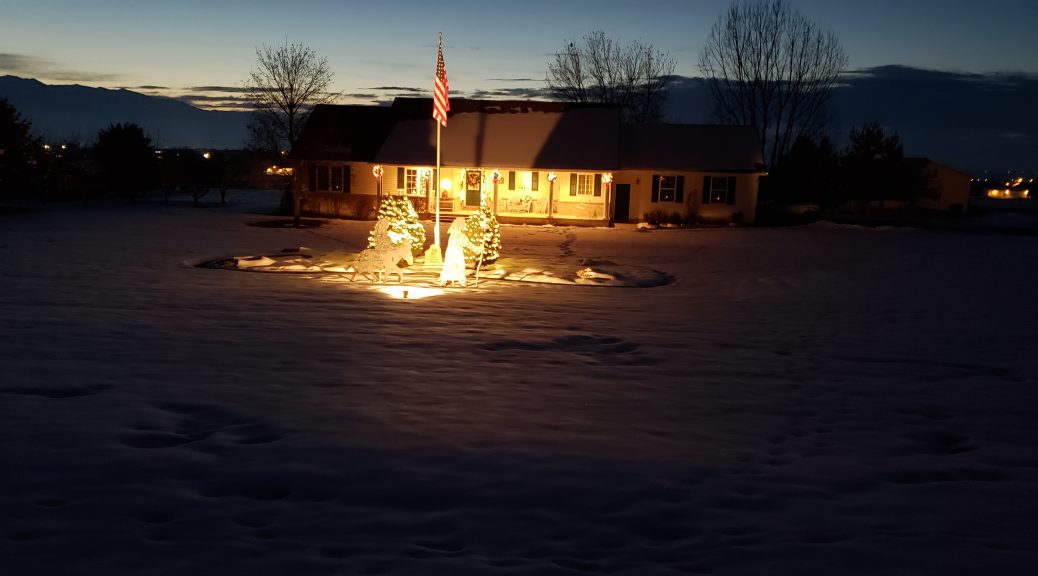 Gifts of joy can come to us in many ways during the Christmas and holiday season. Acts of service, white elephants gifts at work parties, neighbor treats and goodies, and, of course, the giving and receiving of gifts on Christmas Day.

Some gifts of joy are tangible like these vehicle reindeer antlers I won (perched on top of my head in the middle of this picture) as my final white elephant gift at a neighborhood Christmas party.

One of the gift of joys I receive from occasionally wearing my Army uniform is the conversation opportunities it creates. Such an opportunity arose early November at the American Festival Chorus’ performance “War and The Human Heart”  I had a chance to meet Rhea Smith whose husband Johnson sings with the Chorus. Rhea asked Elisa and me if we were going to the Veterans Day concert the following week, which we weren’t as tickets had long been allocated. We enjoyed the rest of our visit then headed home.

A few days later Rhea was standing on my porch with a pair of tickets to the soldout performance.  Rhea remembered our names, even Elisa’s which is sometimes tricky for people, tracked down where we live, and shared two of her four tickets so we could attend.

The tangle gift of tickets was a treat. The new friendship with a most beautiful lady is truly enjoyable.

Elisa and I enjoyed a delightful December evening at the Gallery Walk with our new friends and neighbors Todd and Lisa Henrie. We browsed several stores in downtown Logan including Russ Fjeldsted’s Mountain Place Gallery. The gallery is nestled in the apartment hallways above The Sportsman, the store he and his wife Barbara ran from 1963 to 2000 before passing on to the next generation.

We enjoyed browsing through multiple hallways of beautiful oil paintings, his signature style reflected through his varied landscapes of southern Utah National Parks, Bear Lake, and his beloved Cache Valley. As we finished our tour, Russ sent us and the Henries each home with one of his paintings as a gift.

Russ shared in a Herald Journal interview from 2015 he paints because he loves to. “…and sometimes,” he said, “I sell a painting!”

Receiving our gift of a painting of Bear Lake from one who experiences such love in the creation and in the sharing was truly a gift of joy.

I enjoy a fun cat video as much as the next person, maybe even a little bit more! Now and then our cat Troye Sivan, so named by our youngest after one of her faves, provides cat video worthy entertainment. He gets all excited when we unwrap a candy and used to chase them all the time. But now in his old age of two and a few months, he seems to like the idea of chasing candy wrappers more than the reality. Same is true with chasing after gift wrapping paper.

One of my favorite things he does, worthy of breaking out the Galaxy S9+ smarty-phone camera app, is hiding his eyes. Sometimes he contorts his body into all sorts of twisted up shapes to seek refuge from the invading brightness! While it’s calm entertainment compared to the occasional scurrying after discarded Reeses Peanut Butter Cup wrappers, I enjoy the personality being manifested.

Such moments take me back to when our young children were manifesting their growing when opening Christmas gifts was met with starry-eyed enthusiasm, and excited kids bouncing on our bed Christmas morning was the norm. Truly such moments are blessed gifts of joy.

My most favorite Christmas decoration is this simple silhouetted portrayal of Joseph and Mary on their arduous trek from Nazareth to Bethlehem. This is the home of Brett and Zell Allred, our neighbors and friends in Hyde Park. The silhouettes have a deeper personal connection to the Allred family as the figures are modeled after their son Brad and his wife Kim. The flag flying above the small monument is in honor of their son Michael who laid down a costly sacrifice on the sacred alters of freedom.

It is that Babe born in Bethlehem who is the source of all the greatest gifts of joy. He who was born in a lowly manager is the Prince of Peace whose birth the angels herald to the shepherds on the plains and whose majestic star beckoned the wise men of the East.

May we also hearken to His call and #LightTheWorld by receiving and sharing “good tidings of great joy.”

p.s. Take 13 minutes today to #LightTheWorld by discovering and sharing moments of joy.