I first met Mark two years ago not long after I joined the National Speakers Association (NSA). That’s when we took this picture. I was new in the professional speaker world and Mark was one of the icons.

I connected next with Mark in the summer of 2020 while attending the NSA Influence conference. Technically, this was at a watch party of the virtual conference and we were gathered at Royal Creek Ranches, a beautiful and rustic retreat center in Utah’s west desert owned by Chad Hymas, another world-class speaker.

Many of the best speakers in the region were there, including those who had spoken on the national stages at previous Influence conferences. Despite all these gifted people to spend time with, Mark came and found me.

We spent the better part of an hour quietly talking one-on-one. He expressed genuine interest in who I was and what I hoped to be. He asked how my speaking business was going, gave me specific suggestions, and realistic encouragement. He asked what he could do to help me.

One of the greatest gifts we can give to another is the simple gift of our unhurried time and genuine interest. Such was the gift Mark gave to me. He listened with intention, shared with humility, and answered my questions in a sincere desire to help.

Mark Eaton… all 7 foot 4 inches of him… treated me as an equal.

SUCCESS CREATES SUCCESS. OR DOES IT?

That was another lesson I learned from Mark Eaton.

A powerhouse for the Utah Jazz back in the day, including being selected to the all-star team and twice recognized as the NBA’s Defensive Player of the Year. Post NBA, Mark went on to become a sportscaster, a business owner, and a professional speaker.

When I asked Mark what it took for him to build a successful speaking career, he simply said, “A lot of hard work!”

Just as he had to work hard to become a great basketball player, Mark had to put in that same level of hard work building a business and becoming a professional speaker.

To build his speaking career, Mark sought out coaches just like he did as a basketball player. He got helped to write his book, The Four Commitments of a Winning Team. He continued to study the craft and finetune his presentations.

Mark Eaton… all 7 foot 4 inches of him… the guy who treated me as an equal, encouraged me to keep doing the same.

THE NEIGHBOR WHO BECAME THE GREAT ENCOURAGER

I was like most of the world who only knew Mark as that tall former Utah Jazz basketball player. Our singular interactions granted me a more personalized viewpoint. For Jason Hewlett, who today is a world-class hall of fame professional speaker, Mark was his boyhood friend, his hero, and, in Jason’s very precise words, his “Great Encourager.”

Jason shared this memory when he heard his giant of a friend passed away in a tragic bike accident.

“The first time I got on stage for NSA in NYC over a decade ago, I came backstage to the green room and who was there waiting for me? Big Mark, with the biggest smile you ever saw, as he hugged me and said ‘You killed it! I’m so proud of you, the little weird neighbor kid has become this!’ The Great Encourager.”

Mark saw the greatness in the little weird neighbor kid and became his Great Encourager.

That same Mark Eaton… all 7 foot 4 inches of him… became the guy who treated me as an equal, also became my Great Encourager.

Have a great Monday! Thanks for letting us both share!

P.S. Take 13 minutes today to become a Great Encourager for those who just might feel they are a little too weird to be noticed.

Selling is the lifeblood of business. Without it, cash flow stops, customers are deprived of your awesome solutions to their problems, and you go looking for something else to do.

I know. I know. When I first started selling 30 years ago, I didn’t it was fun either. Then I discovered there was a better way and selling sales could be fun when I intentionally focused on solving problems and creating results rather than selling solutions.

Michelle Turteltaub showed us how to take sales to an exponential level of fun! Her enthusiastic and positive energy will help you “Fall in Love with the Selling.” 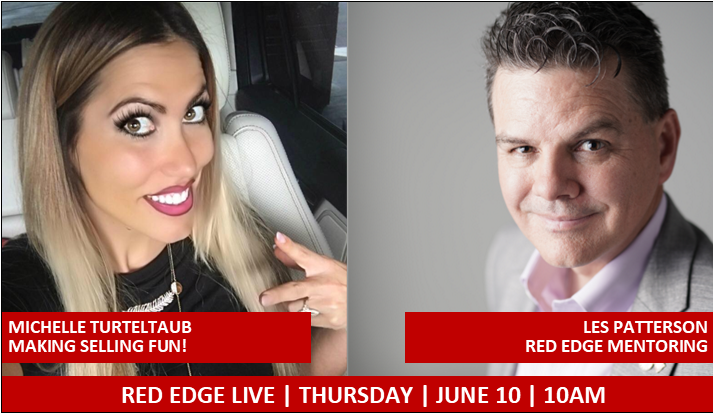