In the frigid temperatures of a Stalag, a pianist with numb fingers composed. Amidst the sweltering rubble of tyranny, a priest came out to pray. Soaring lower than planned on, four strangers plowed millions of dollars into the ground. Across the vast prairies, cached at the base of majestic peaks, a collected diversity of hope created a community connected.

And the harmonious silence of heaven commenced.

THE QUARTET FOR THE END OF TIME

On the eve of the 20th anniversary of the attacks of 9/11, Elisa and I were gently lifted away from the day and then settled back in time 80 years ago to a German prisoner-of-war camp in the early days of World War II.

The back-to-the-past occasion was an 80th anniversary performance of Olivier Messiaen’s “Quartet for the End of Time.” Presented at the beautiful Performance Hall on the campus of Utah State University, the piece was performed by faculty members Rebecca McFaul-violin, Nicholas Morrison-clarinet, and husband and wife Cahill Smith-piano, and Heather Smith-cello.

Messiaen (1908-1992) was a French composer who was called to active duty by the French Army in 1939 to serve as a nurse. Not long into his conscription, Messiaen was captured by German troops and sent to “Stalag VIII-A,” a prisoner-of-war camp in Görlitz, Germany, located on the Polish border. Conditions in the Stalag were so harsh, nearly 50,000 prisoners were crammed into barracks designed to hold only 15,000.

Messiaen shared the following, as reported on Carnegie Hall(dot)org.

“When I arrived at the camp, I was stripped of all my clothes, like all the prisoners. But naked as I was, I clung fiercely to a little bag of miniature scores that served as consolation when I suffered. The Germans considered me to be completely harmless, and since they still loved music, not only did they allow me to keep my scores, but an officer also gave me pencils, erasers, and some music paper.”

While a POW, Messiaen composed want became know as his chamber music masterpiece, “Quartet for the End of Time” (Quatuor pour la fin du temps” in the French). Composed for the four instruments available in the prison — piano, violin, cello, and clarinet — the piece was first performed by the composer and his fellow prisoners.

As we listened to this sacred music, we could feel the journey Messiaen must have experienced as he journeyed from the darkness of despair to the rising hope inspired by this deeply held Christian faith.

When the Twin Towers in New York were attacked 20 years ago, firefighters and law enforcement officers rushed to the scene, climbing the stairs to rescue. Many of them did not make it back down.

Another who also rushed to the scene was Mychal Fallon Judge, an American Franciscan friar and Catholic priest who served as a chaplain to the New York City Fire Department. When the South Tower collapsed, according to Wikipedia, debris went flying through the North Tower lobby killing several people inside, including Judge. At the moment he was struck in the head and killed, Judge was repeatedly praying aloud, “Jesus, please end this right now! God, please end this!”Judge became the first “certified fatality” of the September 11, 2001, attacks.

The courageous words of Todd Beamer on Flight 93 uttered 20 years ago are forever etched in our memory. But until this weekend, thanks to my friend S. Max Brown, I had never read the entire transcript of his conversation on that ill-fated day. Nor had I known of the other men who are credited with overcoming the terrorists and preventing the plane from crashing into Washington, D.C.

As we remember this day, let us also honor Todd Beamer and they who rolled with him, Tom Burnett, Jeremy Glick, and Mark Bingham.

I invite you to feel how their courageous strength may empower you to also be courageous facing your own moments when it’s time to roll.

Cache Community Connections is an interfaith and community group that came together in my home community immediately following the attacks on September 11, 2001. Composed of interfaith religious, civic, and community leaders “in the belief that spiritual leadership and unity are vital to our community’s well being,” as shared on their website.

“They have seen misconceptions of others’ faiths, due to misinformation, be corrected; barriers due to religious bigotry or indifference have come down; and community service organizations can now get awareness of their messages and services out to broad numbers of community citizens through [Cache Community Connections].”

Cache Community Connections works because they talk together and they listen together. One voice is not dominant, nor is one faith, organization, or cause. Together they work to see all, hear all, respect all, welcome all, and then spread their understanding to the community as a whole.

They are carrying on a wonderful tradition our Cache County Executive David Zook calls the “Cache Valley Way.”

It’s that Cache Valley Way that united people together for the United Way of Cache Valley Day of Caring last week. Nearly 30 projects around our beautiful community were worked on by many volunteers under the direction and coordination of director Jimmy Birman (who I am honored to have a true friend, brother, mentor, and client.

Elisa and I spent the afternoon on that Day of Caring spreading slag gravel on a washout trail at the American West Heritage Center. We were exhausted by the physical labor, energized by the unity of the cause.

THE HARMONIOUS SILENCE OF HEAVEN

The title of today’s Monday Morning Boost comes from Oliver Messiaen’s own words.

“Between three and four in the morning, the awakening of birds: a solo blackbird or nightingale improvises, surrounded by a shimmer of sound, by a halo of trills lost very high in the trees. Transpose this onto a religious plane and you have the harmonious silence of Heaven.”

In each of the stories I have shared I see, more so feel, a connecting vine of life creating a harmonious silence of heaven. I hope you also see, and feel, such a gift.

p.s. Take 13 minutes today to intentionally create your own harmonious silence of Heaven. 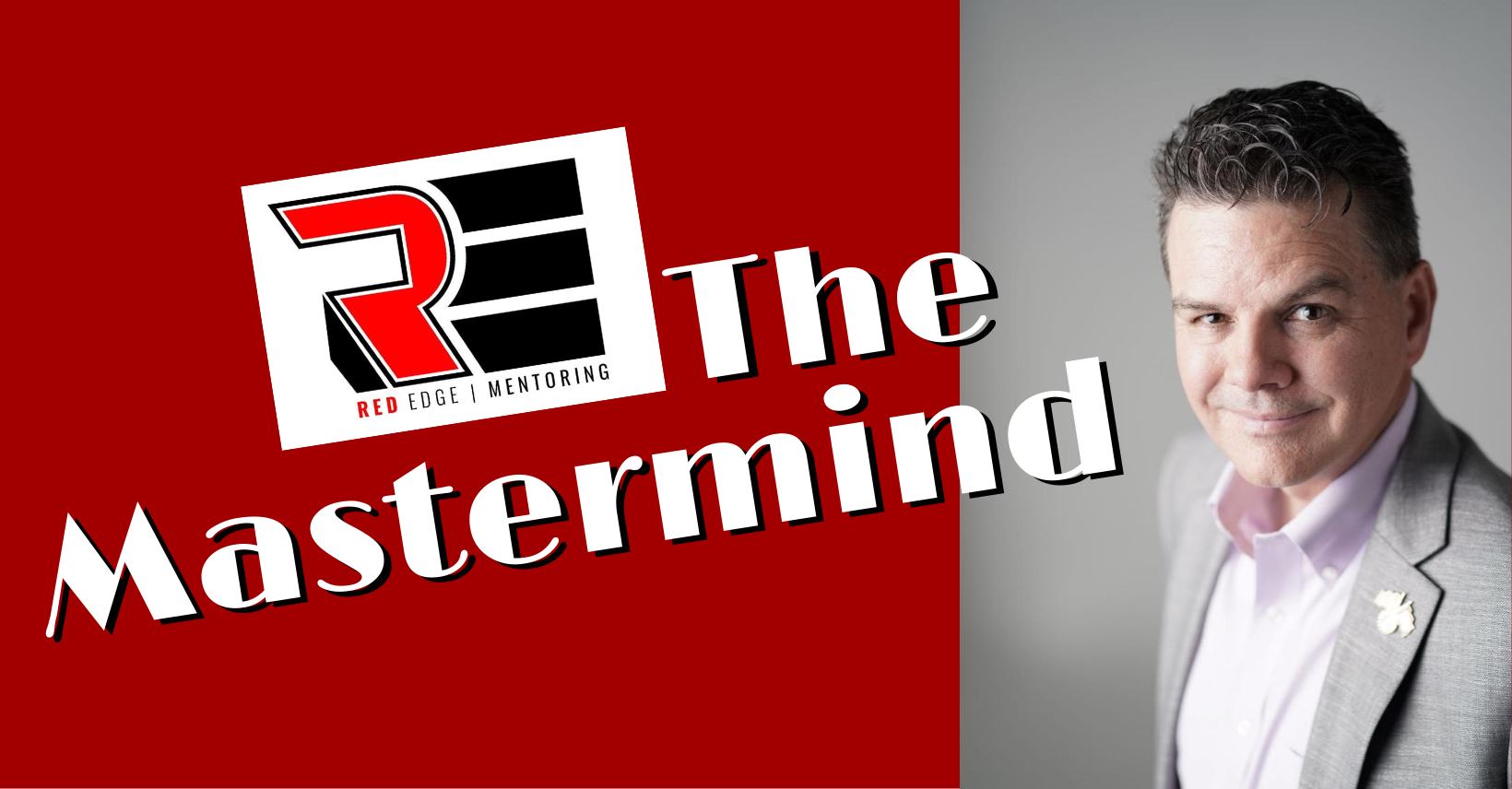 BE PART OF SOMETHING GREATER!

If you are a business leader looking to strengthen the STORY you are creating for yourself, the STRATEGY you are leading your company with, and how you SERVE your family, team, and customers with love and greatness…

Then I have an invitation for you!

Come and discover what will happen when you intentionally surround yourself with other incredible leaders who are creating their stories of GREATNESS!

That’s what we do inside the Red Edge Mastermind groups. We meet twice a month for two hours for a guided and facilitated discussion intentionally designed to empower you as a leader.

We accept new applicants to be part of the Red Edge Mastermind group once every quarter with the next group starting in October. If you would like to be part of this conversation and discover this greatness yourself, drop me a note or give me a call and we will make it happen. 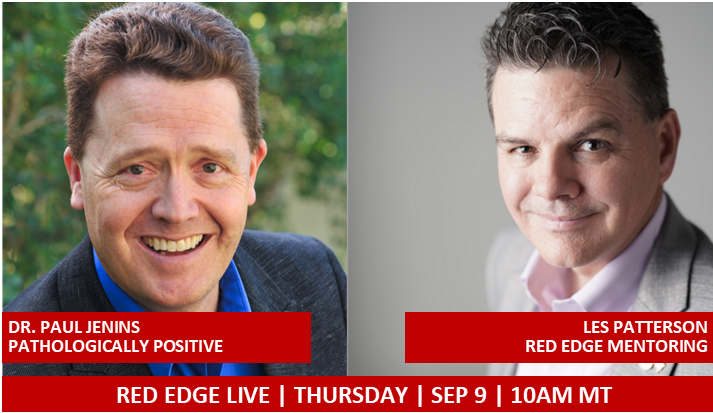 We all hear we about the “Power of Positive Thinking.” Dr. Norman Vincent Peale wrote the quintessential book about it.

But when it comes to business, does it actually work? Will positive thinking translate into a stronger business, more sales, more profits?

Join me for a conversation with Dr. Paul H. Jenkins who just might have a thing or two (or maybe even THREE!) for us to learn.

Dr. Paul invites us to think about it this way… “When everyone in an organization becomes pathologically positive… People experience a higher level of joy and satisfaction, relationships improve, problems are solved, innovation happens, stuff gets done, life gets better.”
Would that improve business???

POWER OF THREE
• Do you mostly experience life/business through a negative or positive outlook?
• How has that outlook impacted your business leadership?
• How could an intentional shift to be more positive improve business?

WHO IS DR. PAUL JENKINS?

Dr. Paul Jenkins, affectionally known as Dr. Paul, is a clinical psychologist specializing in the science and practice of positivity who has often been accused of being “pathologically positive.” What does that mean? From a psychological perspective, pathological means “disordered, disconnected from reality, crazy.”

Well, crazy or not, Dr. Paul has enthusiastically embraced being “pathologically positive” as the theme of his practice as well as the title of his first book. As a coach, keynote speaker and trainer, author, and host of a popular podcast and YouTube channel, Dr. Paul empowers individuals, families, and influencers to go far beyond traditional therapy or positive thinking programs to create and live the life they love through powerful positive psychology processes.