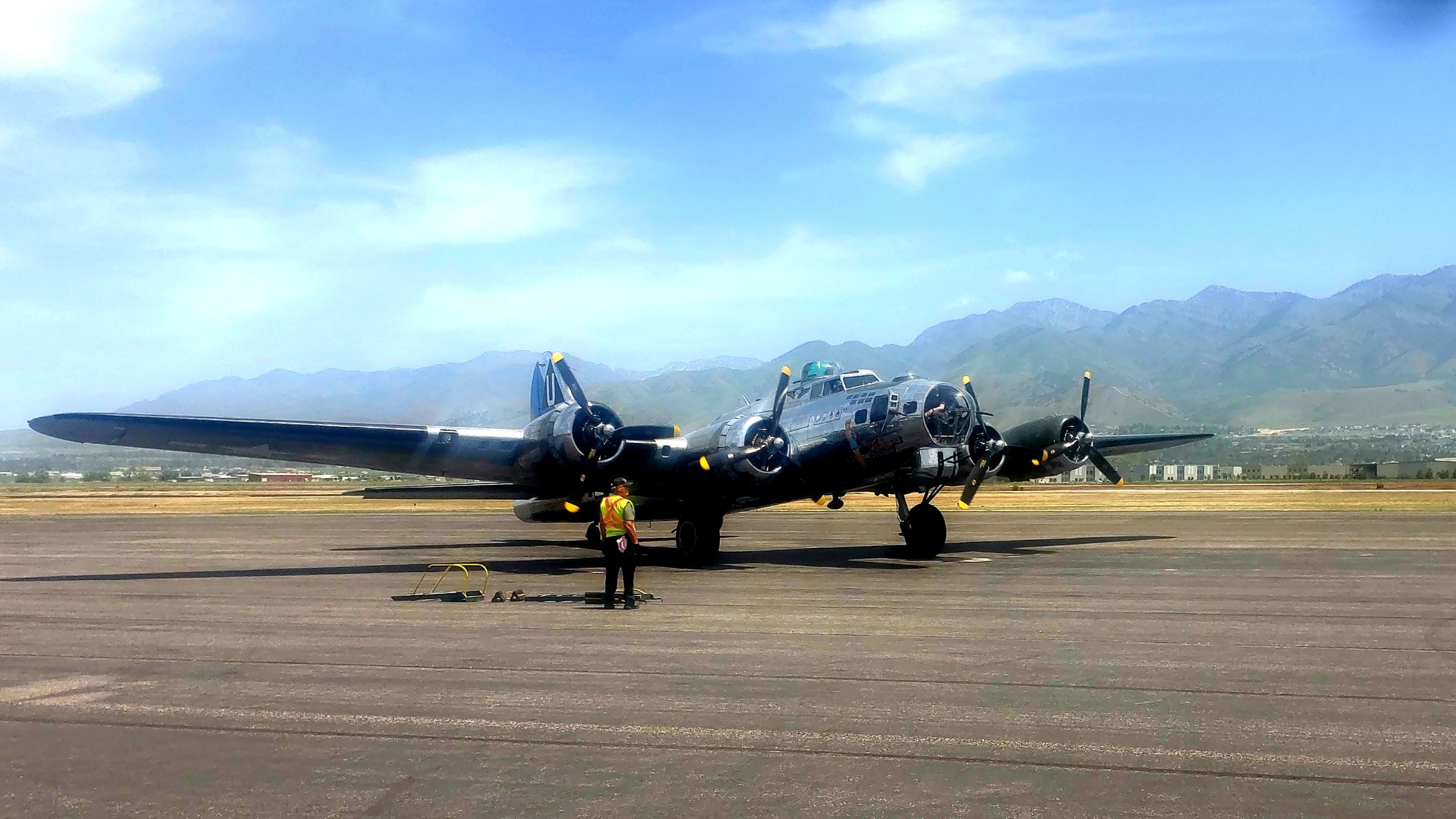 This week Lawrence Gallaher took his “final ride” on the first vehicle he ever “drove”…  a B-17 bomber… at the Logan Cache Airport, the same place he first stepped into the pilot’s seat seven decades earlier.

We learned of Lawrence’s story (I hope I’m spelling his name correctly) from his son Richard (in the picture with Elisa and me) at an exhibit of the “Flying Legends of Victory Tour” featuring restored B-25 and B-17 bombers. Richard was one of the volunteer crew members who donated their time and expertise to maintaining the aircraft and sharing the stories.

Lawrence came to Logan, Utah, as part of the Civil Aeronautics Administration War Training Service (CAAWTS) where he studied at Utah Agricultural College (now Utah State University) and trained to fly with Cache Valley Flying Services. According to Richard, his dad had not yet learned to drive when at the age of 17 he was on his way to Logan and a pilot’s seat in a B-17.

Elisa and I were excited to see the planes and take a tour of them. The more exciting part was hearing some of the stories, such as Lawrence’s.

I met George, another World War II veteran, on our third trip to the exhibit. Originally from Colby, Wisconsin (“where the cheese comes from,” he shared several times), George has called Logan home since he moved here in the 1940s. Along his journey, he racked up over 2000 hours as a radar technician in the B-25 during World War II and Korean War.

For the rest of the story, I turn my pen over to Elisa to share her experience.

Being inside the B-25 & B-17 was such an emotional experience for me. When we got there we toured the B-25 first. I was nervous climbing up the ladder to get in. I was surprised at how little space there is inside to move around and how hot it was inside and how hot some metal was to touch. I cried thinking of everyone who ever flew in a plane like that on a combat mission.

Next, we climbed the ladder to the cockpit. Also challenging for me, but I did it!

We next talked to a gentleman who came to volunteer on this assignment with the Commemorative Air Force unit these planes belong to. His name is Richard.

His dad flew in B-17s during the war. His dad joined when he was 17 and came to Logan to train to fly. (I didn’t know that the Logan Airport was used as a place to train B-17 pilots for the war.) His dad had never driven a car or tractor or anything before. His first ‘vehicle’ to ‘drive’ was a B-17.

His dad’s unit sponsored the renovation of the B-17 that we saw. His dad passed away about 5 years ago. He came to honor his dad and to scatter his ashes while in flight. Amazing story!!

Next, we toured the B-17. This plane really tested my athletic & acrobatic abilities. Climbing in was hard. Then once inside again it was so small. I had to be very careful not to hit my head.

Next, we walked on a very narrow walkway above the bomb doors. I had a really hard time getting on the walkway because there was a big step in with a narrow place to put my foot. Les reminded me that the men would move around the plane while it is flying and even walk on that narrow walkway while the bomb doors are open showing the ground down below. That would be scary.

Getting off the walkway was hard too. I was emotional because I did something hard and also because once again I was remembering all who flew in combat in a plane like this.

We next walked around the ball turret. We could not see inside, but I can’t imagine anyone sitting in that small cramped space.

The rest of the plane was not too hard to walk through and the ladder to get out was very short.

Once again we looked into the bomb compartment and read the many tributes to those who flew in this type of plane. We saw tributes to a POW, a crew who had 3 buddies who were listed as KIA, & a ball turret gunner who flew 35 missions. What an incredible experience!

Thanks to Elisa for sharing her voice on this incredible day.

Have a beautiful Monday! Thanks for letting me share!

p.s. Take 13 minutes today to remember those who fought for the freedoms we simply enjoy every day.