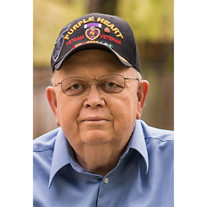 Sgt. Dan Gyllenskog was once a Marine… and he never forgot it.

Dan was known by many names… Sgt. Dan, Mailman Dan, Plumber Dan, and Muskrat (from his trapper days).

I first knew him as “Dutch Oven Dan” as official cook for the Michael J. Allred “Ride for the Fallen.” Dan’s Dutch Ovens was a family business, but he found a lot of joy donating his time and money to honor another Marine and Utah’s Fallen.

“Always a Marine” was a theme Sgt. Dan lived his life by. His obituary attests to that:

“[Dan] has been an active member of Smithfield American Legion Post 58 for over 40 years and served as Commander for over 30 years. He was a voluntary service officer for Veteran Disability Claims and helped many acquire their benefits. He arranged for, staffed and participated in funeral color guards for veterans throughout the region. He worked tirelessly to improve the lives of homeless veterans and acquired many donations for the Fisher House in Salt Lake City.

“He was a member of the Military Order of the Purple Heart and served as an officer for the Department of Utah and Chapter 995. He was a charter member of the Cache Valley Veterans of Foreign Wars Post 12076 and currently serving as a service officer and elected position as adjutant. He was one of the two originators for the Utah Chapter of the Wounded Warrior Fund.

“Dan was instrumental in organizing and naming the Cpl. Gerald Max Rich, Detachment #1352 of the Marine Corps League of Cache Valley and presently serving as Commandant. He was actively involved with acquiring toys and donations for Toys for Tots.”

Sgt. Dan was instrumental in bringing the traveling Vietnam Memorial Wall replica to Cache Valley in September 2011. I had a chance to help tell that story and discovered firsthand Dan’s love for his country and his Marine Corps.

I knew Dan was a Vietnam Vet and a Purple Heart Recipient, but what I didn’t know was his special connection to the Vietnam Memorial Wall. The story was shared at his funeral that Dan always said “my name should be on there,” as he lost many of his “brothers” on February 23 in 1969, a day he considered his “second birthday.”

Every Memorial Day, Sgt. Dan “personally made sure there was an American flag on every veteran’s grave in the Smithfield Cemetery.”

This year the service will continue without him. The American Legion will be putting out flags Saturday morning (May 24) at 0700 hours (7am) and retrieving them Monday evening at 1700 hours (5pm). My family and I will be there helping out. I invite you to join us.

Have a great Monday!