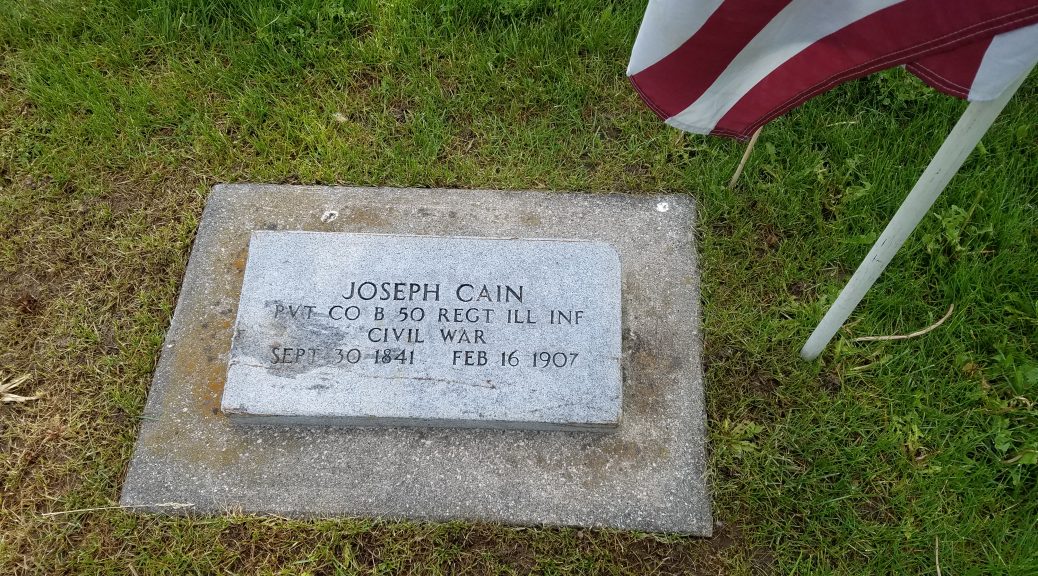 Nestled on the east side of the cemetery in Hyde Park lies the little known grave of Civil War veteran Joseph Cain. According to his headstone, Cain was a private in Company B of the 50th Regiment in the Illinois Infantry. He was born September 30, 1841, and died February 16, 1907.

That’s the facts; but that’s all they are, bare facts. What is the rest of his story? What brought him to Utah, to Cache Valley? Did he have a family? How did he make his living?

I first learned of Private Cain through Hyde Park neighbor Dorothy Cook Izatt. She spent many years caring for his grave before she passed away in 2010. A widow of a World War II veteran, Dorothy felt a strong connection to Cain and for many years cared for his grave along with other veterans.

Dorothy was not related to Cain and, at the time, I didn’t know her connection. I’ve since discovered, “the story of Joseph Cain is an intricate part of the Cook heritage.”

The following is from a May 28, 2007, article printed in the Herald Journal.

Joseph Cain was pursuing gold with William Cook in the early 1900s. Cook was searching for a fortune that would support his family and partnered with Cain in that pursuit.

The two men embarked on a business venture claiming land in the hills above Hyde Park for their mining endeavors.

Cook left Cain to mine the rock while he tended to other duties as a camp manager over sheep. Cain became ill after digging nearly 600 feet into solid rock through a tunnel that was already nearly a block deep, Izatt said.

“He was just so eager to get that gold,” Izatt said, explaining that Cook had suggested Cain dig an air shaft before mining any further into the tunnel, advice unheeded by Cain.

Cain was taken to the Cook residence where he lay ill in bed for nearly two weeks before he died on Feb. 16, 1907, Izatt said. His death was attributed to poisoning from excavating the mine.

“The air just got bad and got him,” Izatt recalled, silently choking back tears. Cain had given his life for the future of the Cook family, she explained.

The soldier was buried in the Hyde Park Cemetery where his grave was forgotten, even in Utah history where Cain was not listed among the seven Civil War veterans buried in the state, until Izatt was told the story of the veteran by her father.

“I always felt bad that no one put flowers on the grave,” Izatt said.

Izatt, with permission from her parents, began decorating the grave “when she was knee-high to a grasshopper” on a yearly basis, knowing only that Cain had given his life while helping her grandfather. Izatt began planting pansies on the grave of the mysterious soldier. And now she decorates Cain’s grave and 17 others with lilacs or mums every Memorial Day.

Recently Izatt and her niece, Kathleen Cook Harris, became curious about Cain’s past and began searching for his genealogical records.

Izatt said Harris found records of Cain being born in Marion County, W.Va. His headstone indicates the date of his birth as Sept. 30, 1841.

The Cain family moved to Illinois where Cain joined the 50th Regiment Illinois Infantry when he was 18. He served in Quincey, Ill., and marched under Lt. Col. Moses Bane in 1861 throughout all of Mississippi, Izatt said.

“Army records say he marched with Sherman to the sea,” Izatt wrote in her family record of Cain. “He was mustered out of the Army July 13, 1865, in Washington, D.C. Pension records show him receiving a Civil War pension from that time until his death.”

Izatt and Harris traced Cain to a mining camp in Central City, Colo., in 1870 where he settled after joining a group of men who were fighting Indians. The two then traced the soldier to Grand Junction, Colo., during 1890.

“The mining bug must have bitten him in Central City as after being in that area records show mining claims in various areas of Colorado with many different partners,” Izatt wrote. “Records also show he married a widow and there were no children. She divorced him but records don’t give her name.”

Cain was later located near the Utah border where Izatt supposed he was mining in Grand County or San Juan County. The 1903 Census places Cain in Logan where he struck the business deal with Cook, Izatt said.

Cain’s last four years have been retold by the Cook family for decades.

“He had just been kind of a part of our family,” Izatt said.

The mine that Cain had helped to excavate was lost in the hills above Hyde Park.

“Every penny they had was put into the mine and now there wasn’t any money to finish it,” Izatt wrote. “Grandpa’s and Cain’s last discovery was worth thousands but would remain unfinished. Grandpa hoped someday his family could profit from it so he didn’t disclose its location. It’s still hidden somewhere in the mountains east of Hyde Park.”

After some convincing by Harris to a Civil War expert at the Salt Lake City Genealogical Library, Cain was listed as the eighth Civil War veteran buried in Utah. 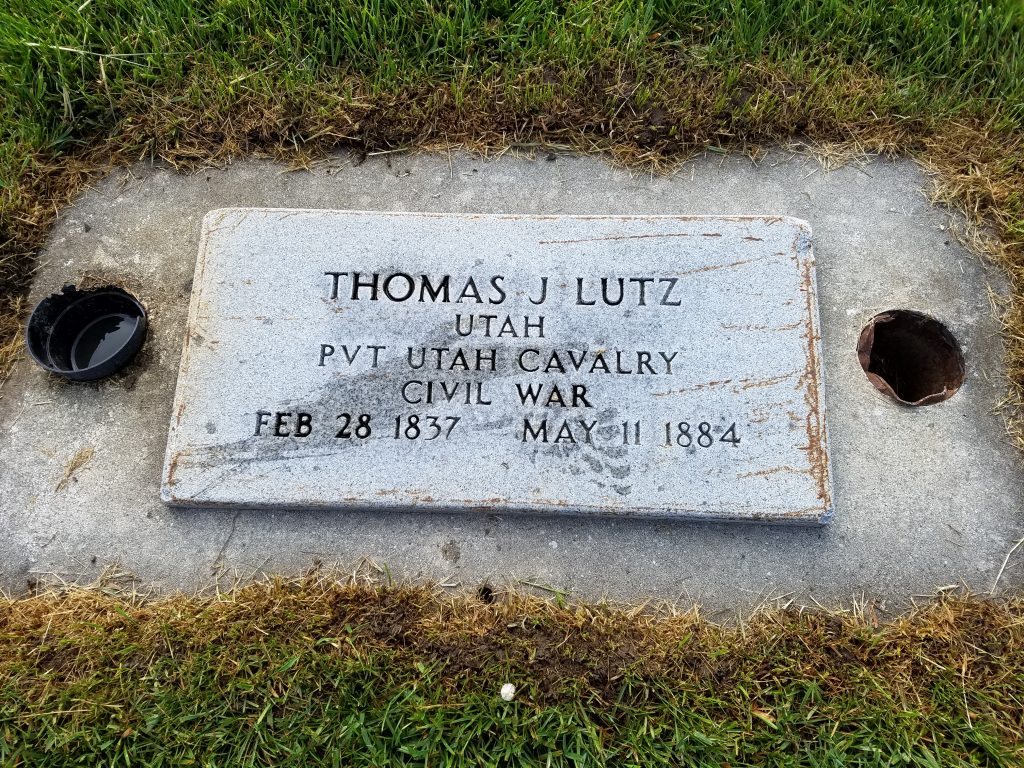 Saturday we discovered another Civil War veteran, Pvt. Thomas J. Lutz, is buried in Smithfield. We were helping place flags in preparation for Memorial Day. This monumental project has long been organized by American Legion Post 58. Legion members, community members, and Cub and Boy Scouts work together to make sure every veteran is honored with a flag.

In my initial research I discovered his full name was Thomas Jefferson Lutz, he was soldier in the Union Army and later the Utah Cavalry. He’s also listed as a member of the Church of Jesus Christ of Latter-Day Saints and appears to have been baptized when he was eight years old. Though according to information at the BYU Religious Studies Center, “there may be an error in either his birth date or confirmation date, as he was not eight years old on the listed date of his confirmation.”

I also discovered, contrary to the information in the previously quoted Herald Journal article, there are actually dozens of Civil War veterans buried in Utah. The article may have intended the number of those buried in Cache County. According to the one list I referenced, I found the following six veterans listed as buried in Cache County. However, this roster is incomplete as Pvt. Lutz is not listed.

My family and I strive to honor veterans, and those ancestors who have passed on, by simply remembering. Some we are able to visit, such as our friend LCpl Michael J. Allred who was killed in Iraq and our son Clint’s best friend LCpl Sammy Johnson who died while serving as a Marine. We also placed flowers on the Mohr family graves in Logan.

We keep close in our heart those we were unable to visit this year, including SFC Ronald Wood, a fellow soldier I deployed with who was killed in Iraq. We also keep close the memories of my father Ed Patterson and Elisa’s father George Bud Peterson, both military veterans.

My heart has been touched deeply as I remember my brother Shane. He lost his fight against depression barely a month ago when he committed suicide.

Saturday, according to proper protocol, we raised our Flag to full-mast then solemnly lowered it to half-mast. At noon on Memorial Day we’ll return it to full-mast.

However you spend this Memorial Day, I hope you’ll also take a moment to remember.

A clear marketing story better engages, creates energy, and builds a passion for your brand, which all lead to better sales. At Red Edge Marketing I help clarify your marketing story to create familiarity and build an automatic level of trust for your business, organization, or nonprofit.

I call it Gaining the Red Edge!