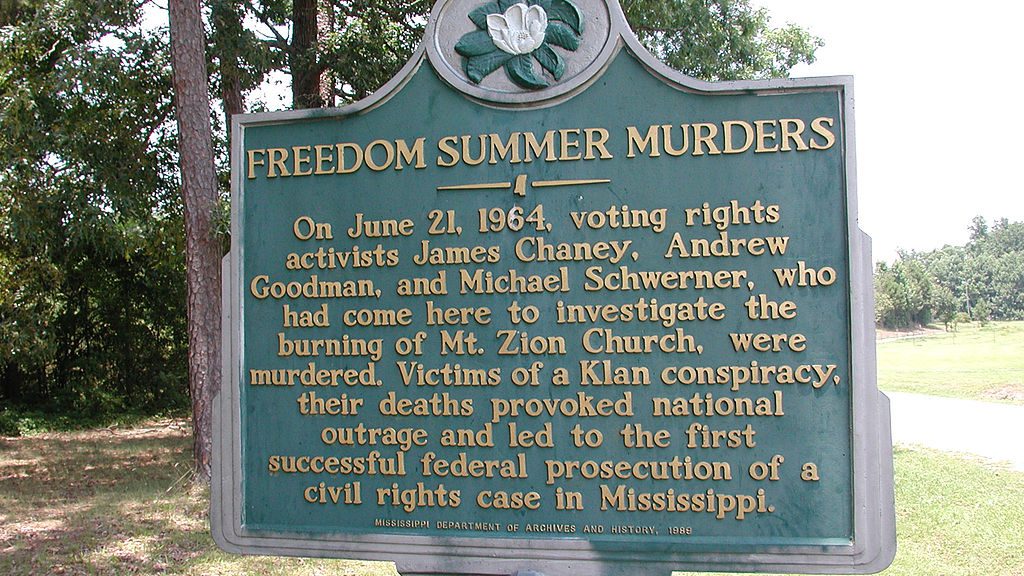 In June of 1964, three civil rights workers were murdered by the KKK in Neshoba County, Mississippi, during the Civil Rights Movement.

The three young men, Andrew Goodman and Michael “Mickey” Schwerner from New York City, and James Chaney from Meridian, Mississippi, had been working with the “Freedom Summer Campaign” attempting to register African Americans in Mississippi to vote.

Forty-one years later, in 2005, Edgar Ray Killen was charged and eventually convicted for his part in the crimes.

The 1988 classic film “Mississippi Burning” is loosely based on the FBI’s investigation of the murders. At the end of the movie, the character of Mayor Tillman commits suicide after being interrogated by the FBI. The suicide caused one of the agents to say: “I don’t understand why he did it. He wasn’t in on it. He wasn’t even Klan.”

The other agent replied: “Anyone’s guilty who lets these things happen and pretend like it isn’t. No, he was guilty all right. Just as guilty as the fanatics who pulled the trigger. Maybe we all are.”

“Anyone’s guilty who lets these things happen and pretend like it isn’t. No, he was guilty all right. Just as guilty as the fanatics who pulled the trigger. Maybe we all are.”

Can anyone explain what happened Saturday in Charlottesville?

Thousands of people were marching with Nazi flags in our country!

David Duke, the former imperial wizard of the Ku Klux Klan, attended the illicit gathering, fueling the bigotry and hatred of the White Supremacists.

“We are determined to take our country back,” Duke said. “We are going to fulfill the promises of Donald Trump.”

Then James Alex Fields Jr., 20, turns his hatred into violent actions, plowing his car, allegedly, into a crowd of people protesting against the White Supremists rally.

Heather D. Heyer, 32, from Charlottesville was killed as a result of the senseless and violent act of terror. The New York Times described here as a paralegal who “was a passionate advocate for the disenfranchised and was often moved to tears by the world’s injustices.”

ARE WE ALL TO BLAME?

I believe that to be true.

But what are we saying when we stand silent, ignoring intolerance, veiled racism, or hatred disguised as patriotism?

Social media is filled with rants of intolerance and hatred. Political affiliation has created a chasm of difference. Mutual understanding and compromising are dying a fast death.

It’s time to realize the next generation, our children, and our grandchildren, are watching what we do and what we say.

They notice when we cuss the news commentators. They read what we post. They see the difference between what we say and what we do.

Maybe the FBI agent in “Mississippi Burning” was correct. If we turn a blind eye, pretend racism, hatred, and bigotry don’t exist, maybe “we’re all guilty.”

p.s. Take 13 minutes today to talk about what happened in Charlottesville, and why it matters.