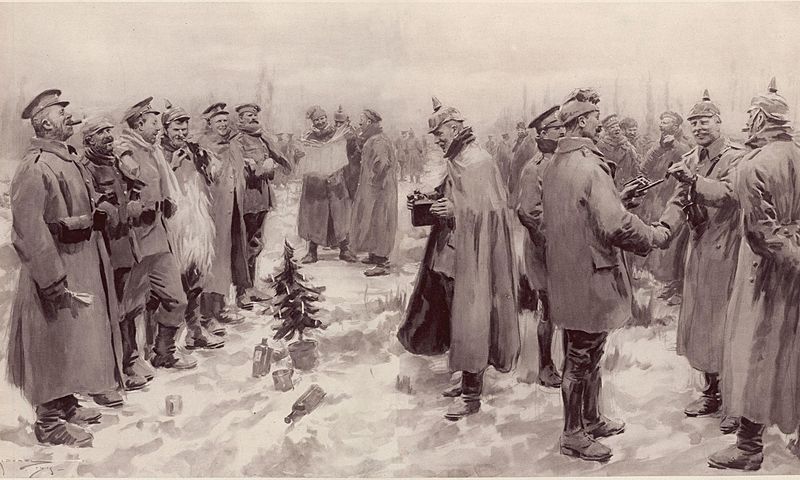 Soldiers hunkered down in trenches did their best to stay warm as a white frost enveloped the ground.

Artillery explosions thundered sharply in the distance, rattling everything around them.

Amidst the hell of war came the gentle sounds of Silent Night wafting softly from the German trenches across no man’s land.

It was Christmas 1914 and things were about to get “All Quiet on the Western Front.” The unofficial Christmas Truce of World War I had begun.

Garth Brooks was my first exposure to this historical event with his popular and touching song, Belleau Wood. Since then I’ve discovered several more.

John McCutcheon’s moving rendition Christmas in the Trenches stirred my soul. My heart ached when the artillery shelling started up again bringing an end to the two day peace as portrayed in the 1969 movie, Oh! What a Lovely War.

I was tempted to sing along with The Royal Guardsman on their 1967 hit ballad, Snoopy’s Christmas, featuring arch enemies Snoopy and the Red Baron experiencing the Christmas Truce:

The Baron had Snoopy dead in his sights
He reached for the trigger to pull it up tight
Why he didn’t shoot, well, we’ll never know
Or was it the bells from the village below…

The Baron made Snoopy fly to the Rhine
And forced him to land behind the enemy lines
Snoopy was certain that this was the end
When the Baron cried out, “Merry Christmas, my friend!”

One of my favorite dramatic portrayals of this remarkable event was produced in 2014 as a “Christmas Advert” for the Sainsbury grocery chain in England. It was produced to commemorate the 100 year anniversary of the Christmas Truce of 1914.

“CHRISTMAS DAY WAS A VERY HAPPY ONE”

While each of these accounts is inspiring, this first-person account is the most inspiring.

The following is an extract from a letter written home by Rifleman C H Brazier of the Queen’s Westminsters of Bishops Stortford. It was published January 9, 1915, in the Hertfordshire Mercury.

“You will no doubt be surprised to hear that we spent our Christmas in the trenches after all and that Christmas Day was a very happy one. On Christmas Eve the Germans entrenched opposite us began calling out to us ‘Cigarettes’, ‘Pudding’, ‘A Happy Christmas’ and ‘English – means good’, so two of our fellows climbed over the parapet of the trench and went towards the German trenches,. Half-way they were met by four Germans, who said they would not shoot on Christmas Day if we did not. They gave our fellows cigars and a bottle of wine and were given a cake and cigarettes. When they came back I went out with some more of our fellows and we were met by about 30 Germans, who seemed to be very nice fellows. I got one of them to write his name and address on a postcard as a souvenir. All through the night we sang carols to them and they sang to us and one played ‘God Save the King’ on a mouth organ. On Christmas Day we all got out of the trenches and walked about with the Germans, who, when asked if they were fed up with the war said ‘Yes, rather’. They all believed that London had been captured, and that German sentries were outside Buckingham Palace. They are evidently told a lot of rot. We gave them some of our newspapers to convince them. Some of them could speak English fairly well. Between the trenches there were a lot of dead Germans whom we helped to bury. In one place where the trenches are only 25 yards apart we could see dead Germans half-buried, their legs and gloved hands sticking out of the ground. The trenches in this position are so close that they are called ‘The Death Trap’, as hundreds have been killed there. A hundred yards or so in the rear of our trenches there were houses that had been shelled. These were explored with some of the regulars and we found old bicycles, top-hats, straw hats, umbrellas etc. We dressed ourselves up in these and went over to the Germans. It seemed so comical to see fellows walking about in top-hats and with umbrellas up. Some rode the bicycles backwards. We had some fine sport and made the Germans laugh. No firing took place on Christmas night and at four the next morning we were relieved by regulars. I managed to get hold of a German ammunition pouch and bayonet but the latter I have thrown away, as it was so awkward to carry. I intend bringing the pouch home with me – when I come home.”

It took great courage for those German and British soldiers to call out to their enemy in a token of goodwill. It took even more courage for them to then raise their heads out of earthen trenches not knowing if they would be shot.

Perhaps the greatest courage they exhibited was to choose to see in their enemy a person who was much like themselves, scared and lonely, and then to share the gift of trust, hope, and peace.

May we this Christmas season find the courage to share the same.

Have a great Monday!  Thanks for letting me share.

p.s. Take 13 minutes today to enjoy one of the many renditions of the Christmas Truce I’ve shared and explore your own courage to give the gift of peace.