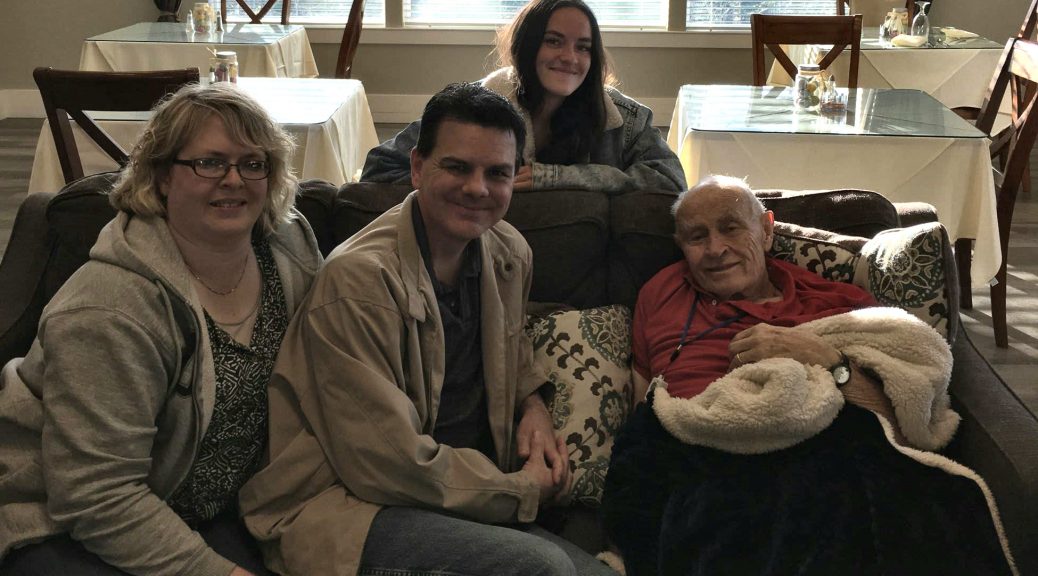 Words such as these, rich and full of picturesque details, first introduced me to JR Allred, a man who would later become a neighbor, close friend and someone whom I would admire and love for many years.

JR passed away a couple weeks ago, 23 days short of what would have been his 90th birthday on May 3.

As we gathered at the church in Hyde Park he called home to celebrate and say goodbye, his beautiful words came trickling back into my memory.

JR was a writer and a storyteller.

He began “working at newspapers while still a high school student,” his family wrote in his obituary, “writing some sports for the Ogden Standard-Examiner and then writing news and sports for the Salt Lake Tribune for about five years.

“Nearly all of his professional career was related to writing. He worked part-time for the Anchorage (Alaska) Times while he was in the U.S. Army there. He was a contributor of publicity materials to many newspapers and other media during a 40-year career in university public relations.

“He also did some newspaper and magazine freelancing along the way, and particularly after retirement when he wrote numerous travel articles.”

While it was those post-retirement travel articles with their captivating richness of voice which first introduced me to JR, it was his other voices which continued the journey of friendship.

I enjoyed many conversations with JR over the years. We could sit in his front room and talk. A quick trip to drop his car for an oil change was a chance to talk.

We enjoyed talking about our common connections with the army, journalism, and writing. But mostly we talked about our kids. And in his case, also his grandkids and great-grandkids.

JR was a good listener. His gentle eyes always conveyed loved and trust. He also had a way of helping me open up.

Aaron, one of JR’s grandsons, echoed my feelings. “He was a rare breed,” he said of his grandpa. “He knew what you didn’t know how to say.”

Occasionally, JR would join our family for a night out to an activity. One such was the Logan City Sesquicentennial Celebration a couple of years ago at the Logan Tabernacle. The event was packed so I dropped JR, Elisa, and Leslie off closer to the Tabernacle then went to find a parking spot.

When we got home, Elisa and Leslie were excited to share what a gentlemen JR was. Though he was walking with a cane, he made it a point to hustle ahead of them so he could hold the door for them.

JR’s son Brian shared a comment someone had passed on during the viewing. “His presence brought light and comfort. He was a true Christian.”

One of his granddaughters, Melissa, said, “grandpa didn’t tell us how to be” faithful, kind, and thrifty, he just did it and we learned.

JR was one who said the most when he said very little.

JR was a kind and gentle husband, a gift he manifested greatly during Theresa’s final years when her voice went silent. While discovering ways to communicate can be challenging, JR didn’t let that stop him.

JR would daily visit Theresa. He would speak to her, read to her, and take care of her. He carried on just he had for 60 plus years of marriage. And in quiet sacred moments, he would pray with her.

He loved her completely.

It’s been my honor the last few years to have an ecclesiastical assignment to watch over my friend JR. Sometimes such assignments grant us a gift to spend the time we may not necessarily have otherwise.

Such was the case with JR. A home teaching assignment took our friendship to the next level. More time together. More conversations. More love.

While the assignment was mine to serve, I was the one who was mostly served and most blessed.

Theresa once gave me a gift when clarity gave strength to her silent voice and she whispered, “I love you.”

JR gave me the same gift the last time we enjoyed a conversation. His voice found strength and he quietly whispered, “I love you.” Then with a gentle smile on his face, he wrapped his arms around a pillow and laid his head on the couch and went to sleep.

Goodbye, my friend, my brother. I love you.

p.s. Take 13 minutes today to enjoy a mentoring voice in your life.