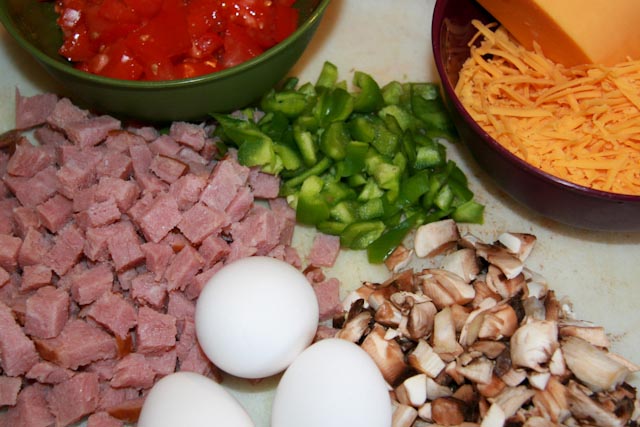 The Army Omelet tradition started when Elisa was just a young child.

Her father, George “Buddy” Peterson, loved omelets, especially those served in the Army chow halls. So twice a year on the first Sunday in October and April, when the family’s normal Sunday schedule took a hiatus, Dad whipped up his “Army Omelets.”

When Elisa and I were married the Army Omelet tradition carried on. On the same Sundays twice a year I set my hand at cracking eggs, grating cheese, slicing ham, tomatoes, and peppers. That, I’ve learned, is the easy part!

I’ve tried different methods, including the griddle and omelet pan, before finally settling on the frying pan. Ironically enough, my best instruction came a few years ago when I watched my first YouTube video on how to make the perfect omelet.

The method of cooking has taken much experimenting as well.

In the early years, I threw in the ingredients too soon, before the eggs had a chance to set up, and I didn’t wait long enough before attempting to flip the omelet over. After many endeavors, and years of trying, I finally realized I was not going to make it as a master omelet flipper.

So I stopped trying.

I know, I know. I need to take my own advice and NEVER stop trying!

Fortunately, I didn’t stop making omelets. Eventually, I learned how to fold in the sides instead of flipping, sprinkle liberally with cheese, then cover with a lid to finish the cooking process.

I take off my hat to Elisa, and to all women and men who effectively manage the daily task of feeding a family. My poor kids mostly starve when it’s up to me to feed them; fortunately, they’ve learned to fend for themselves!

The Army Omelets turned out pretty good today. The cheese melted perfectly and the toast was not burnt!

Our Army Omelet tradition carries on another year.

What traditions are you carrying on?