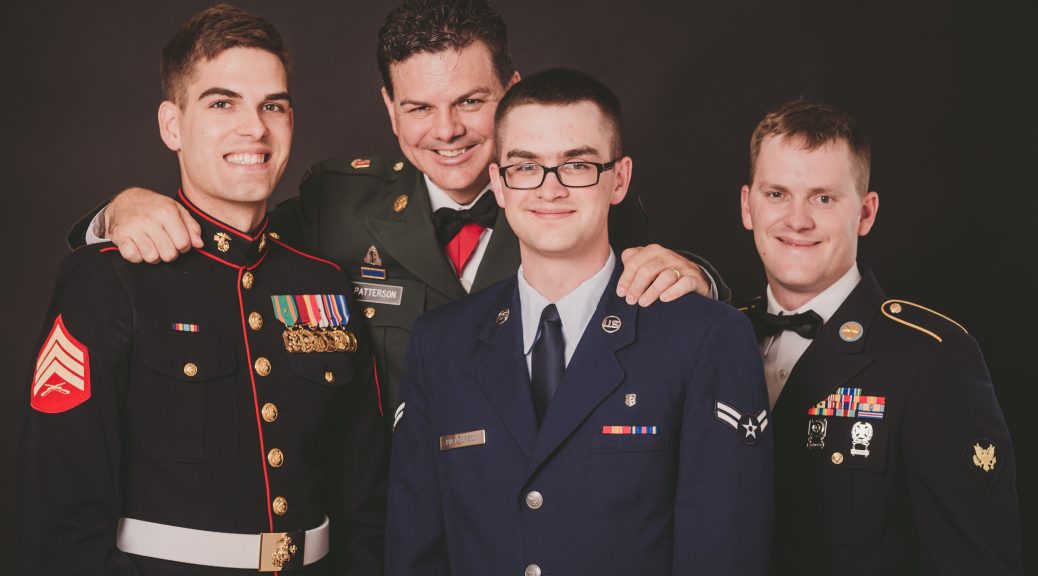 I’m honored to be part of a family of veterans.

My greatest honor comes from my three veteran sons: Cody is in the Army and has previously served in the Utah Army National Guard, Clint serves in the Marine Corps, and Brenin serves in the Air Force. Each is doing their part to defend by serving.

On this Veterans Day when we recognize the 100th Anniversary of the Armistice ending World War I, I have recently learned through Family Search of three relatives who served during the World War I time period.

Albert Russell Racer was a cousin to my great-grandfather Leslie C. Raisor who I am named after. Ironically, though their names are spelled differently, they came from the same grandfather, who also had a different spelling of his last name, James Henry Raser.

Richard Henry Schoon was a third cousin to Leah Ann Ross, the mother of my dad’s father, Aubra Clark Patterson. Aubra’s middle name of Clark has been passed to my dad, to me, and to my son Cody.

MAY WE NEVER FORGET

On this Veterans Day observed, may our hearts be filled with gratitude and love for our country’s veterans. May we always honor their courage. May we always remember their sacrifice. May we never forget those who didn’t come home.

May we always remember they who stood to defend.

THEY STOOD TO DEFEND
By Les Patterson

At a desk or on a ship
In the mud or in the air
Veterans our country served
They stood to defend.

Allegiance forged
Sworn in Constitutional words
Against all enemies
They stood to defend.

That ultimate price
Laid upon the altars of freedom
They were willing to pay
They stood to defend.

Ruffles and Flourishes
Our Flag’s banners unfurled
The charge to lead
They stood to defend.

Be it peacetime or war
Each veteran who served
Is a veteran to honor
They stood to defend.

May our gratitude be eternal
Nor shall we ever forget
Our honor to always remember
They who stood to defend.

Have a good Monday! Thanks for letting me share.

p.s. Take 13 minutes today to remember, honor, and thank a veteran. Most will always appreciate a hug.