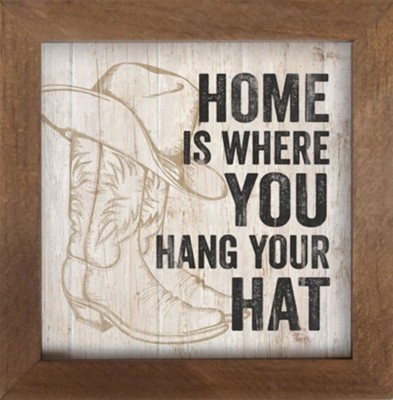 “Home Is Where You Hang Your Hat”

A sign with this nostalgic phrase hung above the booth where my dad almost always sat at the coffee shop inside the Rodeway Inn on Main Street in our hometown of Richfield, Utah.

The “hotel,” as we always called it, seemed like it was Dad’s second home. Not that he actually lived there, nor do I know if he ever literally hung his hat on one of the hooks, but he did spend enough time there the hotel lobby clerk had him on her wake up call list.

Seriously. He would call the clerk every night for a time and ask for a wake-up call!

I spent countless hours there while growing up, too often bored to death as Dad, and anyone else who was up for having their ear talked off, would chew the fat talking about the weather and every other boring factor of life. I swear I read every issue of their tabletop readers!

But every now and then, as I learned to listen and observe, I would catch a little insight into my dad, the other men, and life in general.

The booths and the bar at the hotel were filled most often by farmers and blue-collar workers. Coffee was poured out black and liberally and bacon and eggs along with burgers and fries were the common fare.

Table-talk conversations at the cafe seemed to always start with the weather before moving on to the three hot topics of the day: politics, religion, and water.

Seems not much has changed today.

Republicans and Democrats found welcome space at the cafe (though there was few of the latter) as did those who saw themselves as Mormons and jack-Mormons along with the occasional Baptist, Catholic, and Jehovah’s Witness.

Water seemed to be the only subject that raised the conversation to a heated level. As Wallace Stegner said, “Water is the true wealth in a dry land.”

It was in these conversations I started to really see my dad. He wasn’t much for sitting down and having a conversation. Telling me what to do and yelling more much more common. So I learned to have one-sided conversations with dad by tucking myself into the corner of the booth and listening.

I discovered dad had thoughts and opinions which I had never heard him utter a word about. He asked questions about simple and complex subjects. And people asked him questions and respected his answers, especially when it came to water and irrigating crops. Dad seemed to be a guy who knew what he was talking about.

Somewhere along the journey of growing up Dad transitioned his coffee drinking a few blocks south from the Hotel to the Grand Western Cafe. It was there I learned more about Dad through the conversations he had with other men.

It was also at the Grand Western Cafe I started working when I entered the 9th grade. Peeling potatoes and washing dishes became my life. I shared the story a couple years ago. Check it out if you like!

Such memories, conversations, and lessons have found semi-permanent residence in thoughts.

What places or memories create grounding for you???

p.s. Take 13 minutes today to share some of your grounding memories.