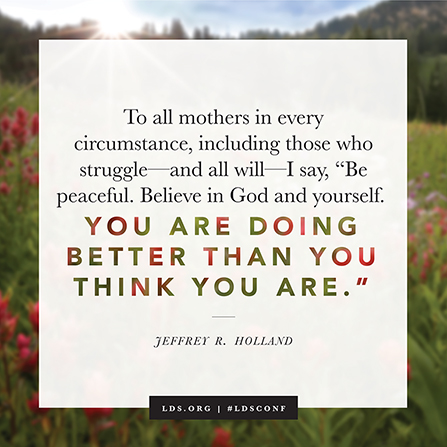 Few messages have touched the heart of mothers worldwide as beautifully and as powerfully as did “Behold Thy Mother” by Elder Jeffrey R. Holland of the Quorum of the Twelve Apostles.

“No love in mortality comes closer to approximating the pure love of Jesus Christ than the selfless love a devoted mother has for her child,” Elder Holland shared as he paid tribute to mothers in General Conference of October 2015.

From their long-suffering love when first bearing their children, and then as “they continue bearing with” those children throughout their entire life.

“It is not only the prenatal carrying but the lifelong carrying that makes mothering such a staggering feat. Of course, there are heartbreaking exceptions, but most mothers know intuitively, instinctively that this is a sacred trust of the highest order. The weight of that realization, especially on young maternal shoulders, can be very daunting.”

Elder Holland shared several experiences reflecting the “majestic influence of mothers.” One which touched my heart greatly was of a young man at a crisis level who faced the darkest moments alone with his mother.

“Through periods of bitterness (mostly his but sometimes hers) and unending fear (mostly hers but sometimes his), she bore—there‘s that beautiful, burdensome word again—she bore to her son her testimony of God‘s power, of His Church, but especially of His love for this child. In the same breath she testified of her own uncompromised, undying love for him as well.”

As she bore the burden of a struggling son, and as she bore her testimony of faith, Elder Holland recounts “she poured out her soul in prayer endlessly. She fasted and wept, she wept and fasted, and then she listened and listened as this son repeatedly told her of how his heart was breaking. Thus she carried him–again–only this time it was not for nine months. This time she thought that laboring through the battered landscape of his despair would take forever.”

I add my voice to Elder Holland’s. “To all mothers in every circumstance, including those who struggle — and all will — I say, ‘Be peaceful. Believe in God and yourself. You are doing better than you think you are. In fact, you are saviors on Mount Zion, and like the Master you follow, your love ‘never faileth.'”

Have a beautiful Sunday!