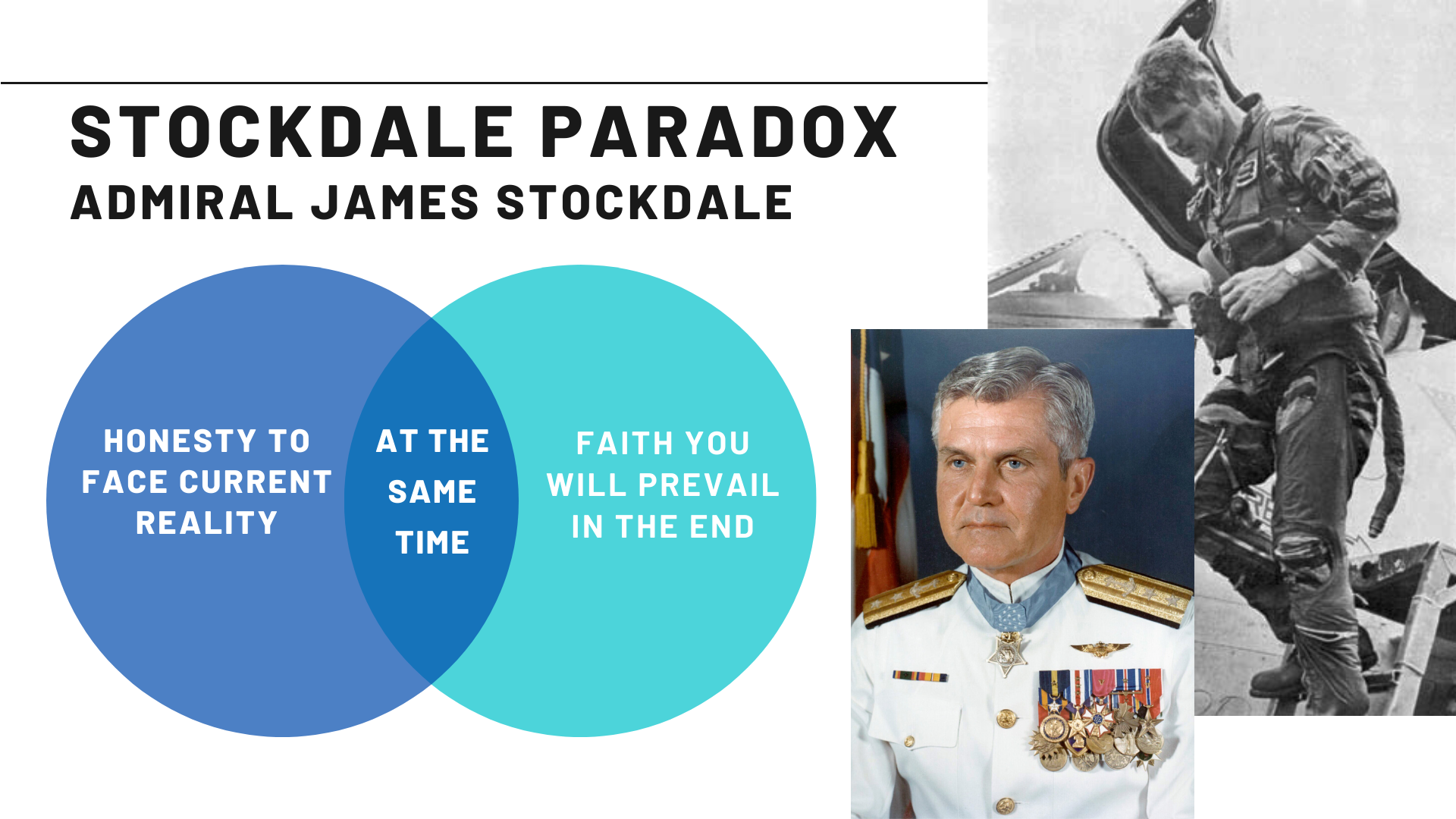 James Stockdale was a United States Navy vice admiral and aviator awarded the Congressional Medal of Honor for his actions in the Vietnam War. He was shot down over Vietnam and held captive for over seven years as the most senior naval officer in Hanoi, North Vietnam. Also of note, Stockdale was a candidate for Vice President of the United States in the 1992 presidential election, on Ross Perot’s independent ticket.

Interviewed by Jim Collins for his landmark book “Good To Great,” Stockdale shared what got him through his 7 years in the Hanoi Hilton. His concept is known as the Stockdale Paradox.

Collins asked Stockdale how did he not let the oppressive circumstances of being a prisoner of war wear him down?

“Well, you have to understand, it was never depressing. Because despite all those circumstances, I never ever wavered in my absolute faith that not only would I prevail–get out of this–but I would also prevail by turning it into the defining event of my life that would make me a stronger and better person. Not only that, Jim, you realize I’m the lucky one.”

He said, “Yes, because I know the answer to how I would do, and you never will.”

A little later in the conversation, after I’d absorbed that and said nothing for about five minutes because I was just stunned, I asked him who didn’t make it out of those systemic circumstances as well as he had.

He said, “The optimists. Yes. They were the ones who always said, ‘We’re going to be out by Christmas.’ Christmas would come and it would go. And there would be another Christmas. And they died of a broken heart.” Then he grabbed me by the shoulders and he said, “This is what I learned from those years in the prison camp, where all those constraints just were oppressive. You must never ever ever confuse, on the one hand, the need for absolute, unwavering faith that you can prevail despite those constraints with, on the other hand, the need for the discipline to begin by confronting the brutal facts, whatever they are. We’re not getting out of here by Christmas.”

The Stockdale Paradox teaches you must honestly face your current reality while having the hope and faith you will prevail in the end.

HOW CAN YOU DO BOTH?

Recognize how you feel, notice your responses to the situation or condition, be aware of your emotions, and then create an honest look at yourself as a person and as a leader. Using a tool such as the Red Edge Mentoring Self-Leadership Assessment can help guide and focus that intentional self-reflection.

Remember, while being honest in your self-reflective is crucially important, also allow yourself some grace. This is a measuring stick for stepping into your GREATNESS, not a yardstick for punishing your behavior.

p.s. Take 13 minutes today to understand how the Stockdale Paradox applies in your life.

Check out last week’s Red Edge Live interview with Becky Mackintosh, author of Love Boldly: Embracing Your LGBTQ Loved Ones And Your Faith

One thought on “Monday Morning Boost: The Paradox of Stockdale”