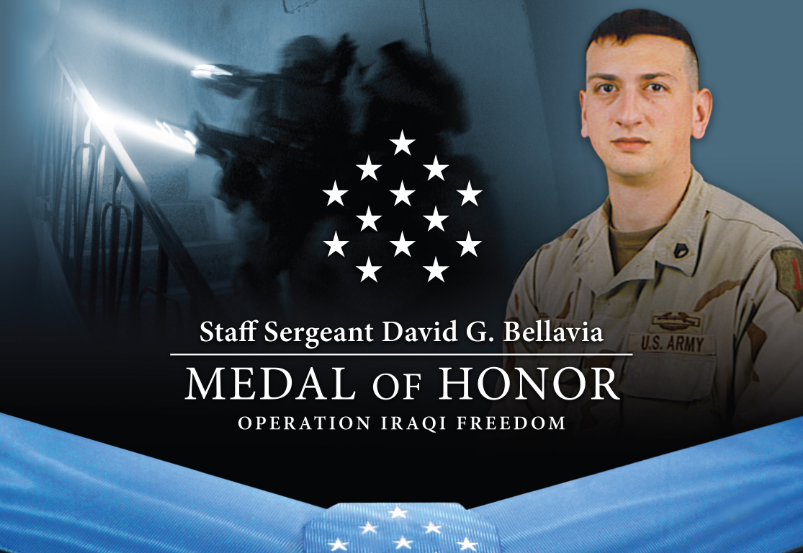 Is what you believe so important that other people would willingly sacrifice their tomorrows for your beliefs?

On this Day of Independence, that is the powerful question asked of each of us by Army Staff Sgt. David G. Bellavia, our Nation’s first living recipient of the Medal of Honor for actions that occurred during the Iraq War. The Medal of Honor is the nation’s highest medal for valor in combat awarded to members of the Armed Forces.

His official citation, reads, in part:

“Staff Sergeant David G. Bellavia distinguished himself by acts of gallantry and intrepidity above and beyond the call of duty on November 10, 2004, while serving as a squad leader in support of Operation Phantom Fury in Fallujah, Iraq. … Acting on instinct to save the members of his platoon from an imminent threat, Staff Sergeant Bellavia ultimately cleared an entire enemy-filled house, destroyed four insurgents, and badly wounded a fifth. Staff Sergeant Bellavia’s bravery, complete disregard for his own safety, and unselfish and courageous actions are in keeping with the finest traditions of military service and reflect great credit upon himself and the United States Army.”

Staff Sgt. Bellavia asks his powerful question during the Medal of Honor ceremony. I invite you to simply listen. His speech starts at 5:00, this excerpt is at 7:45.

“These men will never get the chance to experience the cycle of life, the birth and growth of their children. They shall not grow old because they chose to stand in our place and face the enemy for us. It is not enough to acknowledge the fallen by name or just inscribe their names in marble as proof that they lived and died. To truly honor the Fallen we must acknowledge how and why they gave their lives. Their death wasn’t a random act or a splash of misfortune. These men and women voluntarily put themselves in harm’s way prepared to die so we may rest secured at home. They are the insurance policy that guarantees that our founding documents, our God given rights, are more worthy than their own tomorrows.”

I ask of you my friend as I ask of myself…

Are you more worthy than the tomorrow of another?

However you celebrate this Day of Independence, I encourage you to honor their tomorrows by standing for the Flag, saying thank you to those who Stood to Serve, and sharing with your children and/or grandchildren the blessing of being an American.

Have a beautiful Monday! I love you friends!

p.s. Take 13 minutes today to share what you are most grateful for being an American.